A Women’s Roundtable: The Rising Stars of the Municipal Finance Industry

For the past five years, The Bond Buyer’s Rising Stars program has recognized some of the brightest young minds in municipal finance. The competitive program honors municipal finance professionals under the age of 40 whose strong leadership, creativity, and innovative work have positively impacted their community and the industry. 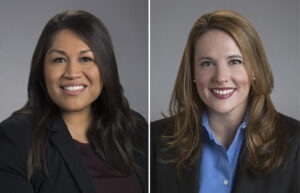 What did your Bond Buyer Rising Star award mean or represent to you?

Marti: When you start working in this industry—and especially when you attend a national industry conference—you realize the breadth and size of the municipal market. For me, being named a Rising Star in such a large field was just a huge honor.

Municipal finance is such an aging industry that’s very top heavy and most people in the industry have been involved for a very long time. When I was named a 2015 Rising Star, it felt good to be recognized without having 30 years of experience under my belt.

Ester: My nomination as a 2020 Rising Star meant a lot to me because it was a nomination by my coworkers. The size of the industry is significant, but this award came from my peers, meaning it was close to HilltopSecurities.

Is there a person or experience that has helped you define your professional career?

Marti: My career path was defined by my very first interview with a senior banker at FirstSouthwest (HilltopSecurities' predecessor company). When I walked into his office, he challenged me by asking, “do you think you can really take on this role?” Those words really stuck with me and motivated me to prove that I could handle whatever the job threw my way. It just set the stage for the firm’s expectations and how I wanted to exceed them.

Ester: I was initially paired up with a woman at the firm who has been in the industry for more than 35 years. She’s been more of a teacher and a mentor, and she also introduced me to the higher education sector. Because of her, I’ve been able to specialize in that specific sector and learn from her. She’s such a strong woman and she’s done a lot for women in the industry. Just having her as a teacher and mentor has been extremely rewarding. She taught me that as a female in a male-dominated industry, it's important to speak up for myself—and I have.

What do you think has enabled you to build a successful career in municipal finance? What advice would you give to young people pursuing a career in the industry?

Ester: For me, mentorship has played a huge role in my success in municipal finance. HilltopSecurities has had mentorship programs in the past and they worked out well because those experiences allow you to both give and take advice. Seeking out mentors early on in your career is very important. Ultimately it helps you build and strengthen your career path.

It’s also about working hard. You don’t necessarily have to be the smartest person in the room, but you must be willing work hard and learn as you go. Try to do as much as possible so you can find your place and your career path.

Marti: For me, a willingness to put myself out there and speak up has contributed to my success. When you’re in the minority—you’re younger, you’re female—it can be intimidating. But having the courage to ask lots of questions, question the way people do things, and provide ideas on how to do something better have been a big part of my success. I think presenting ideas helps establish credibility early on. As females, I believe we struggle with bringing ourselves and our ideas to the table because it goes against our nature. We find ourselves fighting this upward battle to put ourselves out there, but that’s a big driving force to being successful.

The good thing about being in our field is that nobody really enters it with a huge leg up or significant industry knowledge. You usually have to learn as you go, and as a result, the playing field is equal from the very start. For someone coming into the industry, getting a grasp on that can help boost their confidence. How has HilltopSecurities’ culture played a part in your success?

Marti: HilltopSecurities is unique in that a lot of our investment bank competitors have huge professional hierarchies that dictate which bankers work on which transactions. You might be far removed from the executive team at a larger, less personal organization. However, at HilltopSecurities, we have much more access to leadership. If you really want to rise up and work on something, it’s possible. I was able to assume a lot of responsibility early on because people were just willing to give me a shot. Whereas, at larger organizations that might never happen. I was working on projects that were much greater than my own title or experience because the people I was working with allowed me to get out there and either sink or swim. That’s kind of unheard of in a lot of organizations. At some investment banks, you might not even talk to a client until you’ve been there for several years.

Ester: We came from FirstSouthwest and smaller firms, so we grew up with that small firm culture. It allowed us to jump into a wide variety of projects and learn quickly. When FirstSouthwest merged with Southwest Securities and became HilltopSecurities, it combined an older and a newer culture. This type of environment is great because it fosters growth.

Is there someone either personally or professionally who has inspired you to pave your own career path?

Marti: People in both my personal and professional lives have inspired the trajectory of my career. Professionally, I’ve been inspired by having someone who can teach me the ropes. Most of my professional mentors have all been male. I owe a lot of my professional success to them because they’ve really created the opportunities for me to get out there, strengthen my talents, and grow.

Personally, my mom is a huge inspiration to me. She was a professional woman. She worked very hard in another male-dominated field completely unrelated to finance, but she always provided encouragement. She’s responsible for my brazen attitude and the competitive force that made me want to take on a challenging position.

Ester: I’m inspired each day by different people. Everyone has so much to give. For example, sometimes I’m inspired by people’s quantitative skills, which is also one thing I bring to the table. I’m honestly inspired by everyone I interact with on a daily basis, including friends, family, and coworkers. I consider the people at HilltopSecurities my family and they inspire me each day.