By Tom Kozlik, Head of Municipal Research and Analytics

The Decline of One Business Norm Foreshadows Another

I would often intercept my father as he tried to inch his Volvo up the gravel driveway of my boyhood home when he returned from work. I’d force him out of the car while holding either our baseball gloves or a football. That way, we’d have some time to play catch before my mother knew he was home. He would always stand in the yard wearing his business suit and dress shoes to play catch. This was around the time when McDonalds first opened a restaurant in our small Wisconsin town and Apple began selling its Apple II personal computers. My father worked in marketing and sales for regional manufacturing firms in the Midwest. I remember he wore a suit and tie and carried a briefcase each day, which was the expected dress code across many industries. I have learned that times change.

I bought two discounted suits at Brooks Brothers before I began PaineWebber’s entry-level public finance training program in summer of 2000. At the same time, the tech boom of the late 1990s and early 2000s was siphoning off new graduates from traditional investment banking and consulting firm jobs. Technology start-ups promised ping-pong in the lobby, snacks, and more casual dress codes leading big firms in New York, like the one I had just started working for, to adjust. Only a few months after I began, my firm officially announced a business casual dress code.

Because the firms where I’ve served included primarily client facing roles, I’ve continued to wear suits to work. However, I’ve seen the official and what I’d call “unofficial” or “unwritten” business dress codes almost everywhere I’ve worked become relaxed by management, workers, or both over time.

Some companies and governments have been quick to embrace the benefits of remote work and have instituted hybrid or remote work guidance, like the way several tech firms of the 1990s did. Others will officially or unofficially phase it in where possible or face consequences. Here is why.

There is an existing clash between business leaders, political figures, and workers in the post-COVID reality. Vested interests exist at every turn. The results of this clash could change not only the public finance landscape, but could reshape city populations of every size, and may help redefine the work and home life relationship all at once.

Some business leaders have been vocal about their desire to have employees back in the office full-time. One Wall Street financial firm made headlines last summer when its leader claimed that if workers could go out to meals in New York City, they could make it into the office. This same business leader recently re-upped the push to get his employees back into their offices when he explained that workers need to get out of the mindset of “Jobland,” and get into the mindset of “Careerland.”

Some polling from the management side of business argues for a return to the pre-COVID-19 norm. A Goodhire survey that polled about 3,500 managers reported that about 60% of managers believe their companies will mandate a full-time return to work policy and almost 80% of those managers polled also expect negative consequences to employees who fail to comply.

Political actors are also pushing for workers to return to their desks full-time. Eric Adams, New York City’s Mayor, called on New Yorkers multiple times this year to stop working from home. Mayor Adams said remote work is partly to blame for draining the New York City economy. In addition, Governor Kathy Hochul of New York has also renewed her call for workers to return to their offices.

The Work-From-Home Reality
The reality is that everywhere you turn there are private and public sector employers shifting in favor toward the work-from-home dynamic, or at least some type of hybrid approach. Some are moving toward policies that allow workers to make the choice themselves, while others are trying to find a balance between what workers desire and management’s need to have folks in a physical location at least regularly. Why? Because the data and polling indicate a high percentage of workers in favor of working from home, or to have the flexibility to work-from-home at least a portion of the week. For example, the Kastle “Back to the Office Barometer” is still only at 42% of the March 2020 levels. The numbers are a little over 50% in Texas cities such as Austin, Houston, and Dallas, but this still tells us that many workers’ in-office participation is not close to pre-COVID-19 levels. If this is still the case now it may never return to pre-COVID levels. 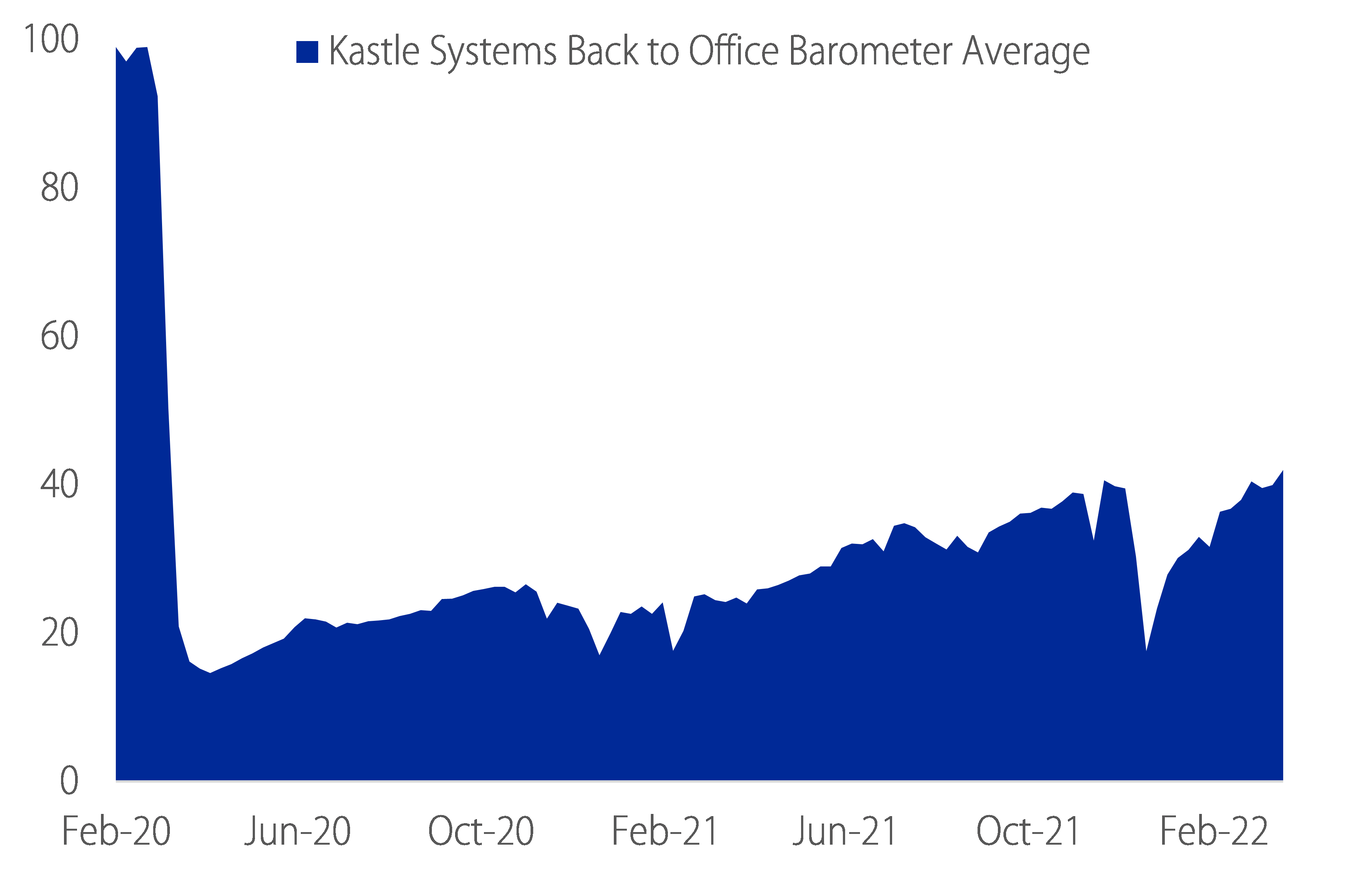 Nicholas Bloom, a Stanford economic professor has reported data that supports a likely wave of future changes to in-office trends. Bloom’s analysis shows that almost half of workers in major cities across the country are not expecting to be in the office daily. According to Bloom, New York City workers plan to cut their time in the office by about half, and their spending in the city will also plummet $6,730 by worker, down from $12,561 as companies adjust to hybrid working schedules. 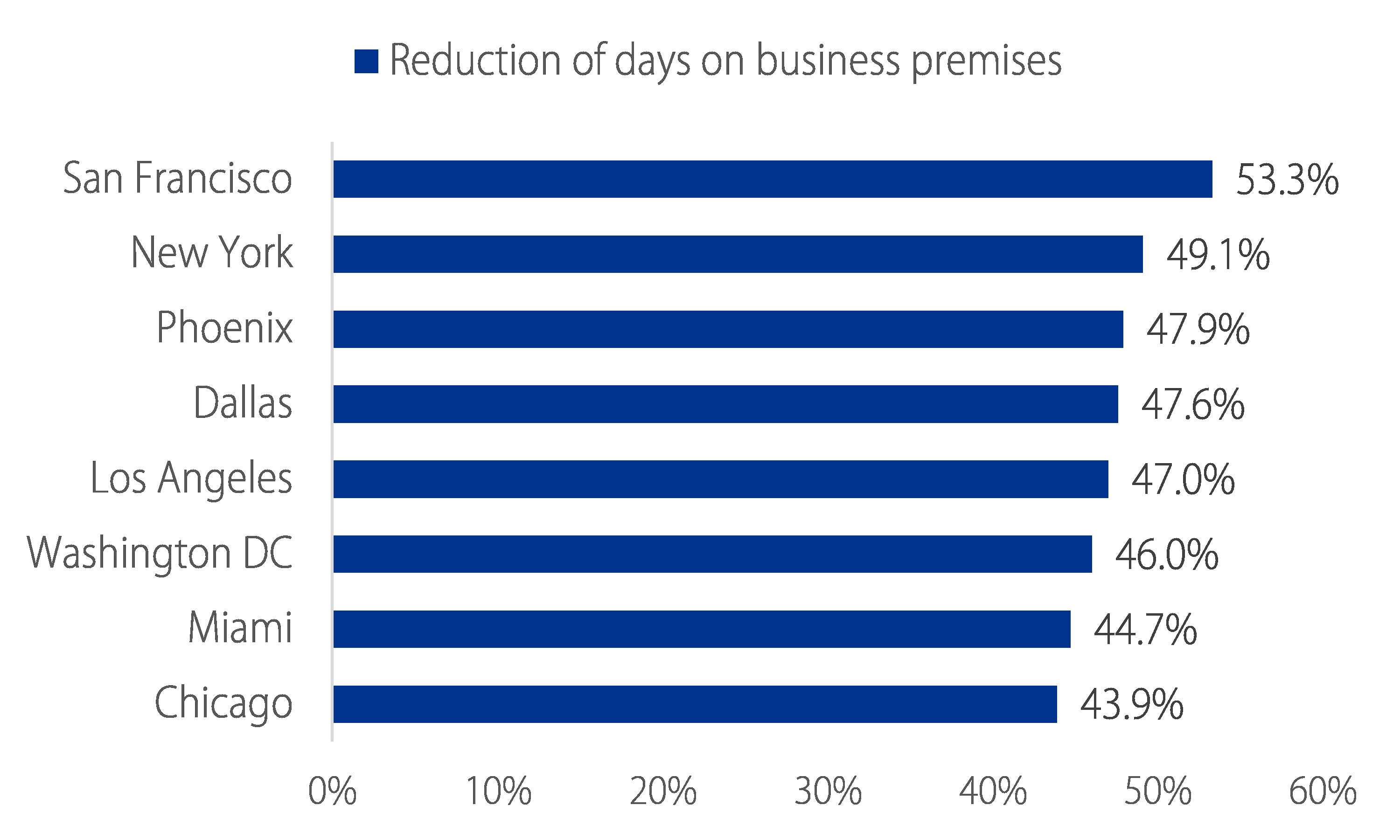 I believe that other adjustments are anticipated in other parts of the country too. About one third of voters who work in San Francisco said they expect to do their jobs from home permanently. This is likely going to have a lasting impact on the city, surrounding area, and other regions where these remote workers move to. San Francisco Kastle systems data shows that only about 32% of workers are back at the office compared to the 42% national average.

Technology Will Win
So, approaching the question of who we expect is going to win this remote-work conflict, I believe the answer is clear: technology is going to win this remote-work conflict. Business and political leaders and their organizations will be left behind the new standard of business if they fail to adapt to this accelerating pace of technological change. If they fail to adjust officially or unofficially, they will be left behind, like the companies that did not adjust their dress codes in past decades. This does not mean that everyone will or even should work from home. However, this standard is likely going to be something that evolves quickly as workers and managers figure out the optimal combination that works in different industries.

These changes are going to impact the public finance landscape as well. In some places, the impacts will shift economic activity, and lower sales and income (wage) taxes, making some sectors that are more dependent on those revenue streams more susceptible to potential financial strain. The shifts could even lead to credit downgrades in some cases. This is a once-in-a-generation shift that will likely play out more quickly and in select locations versus others, but will play out whether or not leaders acknowledge or like the trend.

Back to My Father
If you are still wondering about my father, he is still working. Although, he has not dressed in a suit or tie for over a decade. We visited a Fort Worth trade show together just a few weeks ago and there was not a tie in the convention center. The pre-vaccine times during COVID-19 were stressful for my father as he is immuno-compromised. Yet, he was able to stay safe. He is double boosted and has been happy to have gotten back to some business travel. Even still, he has worked from home each day since 2018. And we still play catch each time we see each other.

The Bond Buyer Names Claire Merritt as a 2022 Rising Star